We use cookies on this site to help provide the best possible online experience. By using this site you agree to our use of cookies.

Unfortunately, this agreement expired on the 31/10/2019 and is unavailable for purchase at this time.

ESDU validated engineering data: affordable site licences for methods, best practices, data and software tools. ESDU helps students and researchers to explore and optimise their design iterations and validate their final designs quickly and easily. It is relevant to a wide range of engineering disciplines, including mechanical, aerospace, structural and chemical.

Institutions may purchase one-year licences, to 31 October annually which will automatically renew unless licensee gives notice to terminate on or before the preceding 31 July.

A five year licence may also be purchased, ending on 31 October 2019. In this case there is an opt out clause which is activated by giving notice on or before 31 July 2017 to terminate on 31 October 2017.

For a 60 day free trial of this service, exclusive to the Chest Agreement, click here Free Trial of IHS ESDU.

Other organisations aligned with Jisc’s charitable objectives of supporting education, research bodies and the public sector may ask to participate in the Agreement. Chest will liaise with the Supplier about any such requests.

This is the fourth 5-year Chest Agreement for ESDU Validated Engineering Data. The first Agreement started on 1 November 1999.

New content is added on an ad hoc basis – there is no regular published schedule.

All additions and new functionality will be incorporated at no additional charge.

For a 60 day free trial of this service, exclusive to the Chest Agreement, please click here Free Trial of IHS ESDU

Support will be provided by IHS via a single contact or his/her deputy at each Institution. Contact details:

Licensees may reasonably expect queries to be answered within one working day.

Product Documentation is provided online and can be copied.

Making copies of training materials for teaching purposes is permitted.

Download the poster to promote the ESDU Toolbox Apps for engineering calculations to your students.

Help students learn to use ESDU using the quizzes on; 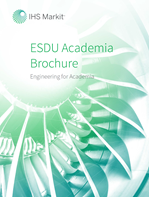 ESDU Academia Brochure - Engineering for Academia - many major universities worldwide use ESDU data and software in teaching and graduate and postgraduate research projects. Find out how you can use ESDU to equip your students with the latest tools and knowledge that industry demands.

Unfortunately, this agreement expired on the 31/10/2019 and is unavailable for purchase at this time.